Well, here we have it, the first 5/5 stars review of the Placing Myself challenge! I hardly know where to start but, my goodness, what a novel Alan Garner’s Thursbitch is.

Before I began reading, I don’t mind admitting that I had absolutely no idea what to expect from this author. I have never come across any of his earlier books, some of which are for children, and almost all said to be even better than this one (how?!), but I know now that his life’s work has combined archaeology, mythology, fantasy and a huge helping of folklore, all deeply rooted, at various points in time, in his native county of Cheshire, and written in what some choose to describe as the ‘Cheshire dialect’ (think Sir Gawain and the Green Knight, but more on that later.)

This particular novel finds its setting in the remote and eerie valley of Thursbitch and the adjacent town of Saltersford. Jack Turner is a Saltersford jagger, or packman, who travels the long trade routes of 1730s England, returning home with strange goods and extraordinary stories of the outside world. In Derby and London he even witnesses the practice of Christianity – a religion that remains completely unknown and unintelligible to the valley where, from time immemorial, pagan monoliths, Bacchic worship (led by Shaman Jack himself) and cultic rituals dedicated to nature and her seasons have ruled the day, and indeed the night. In fact, the Tors are infused with a kind of spiritual energy or “electrical magic”1 that can still be felt 250 years later by Ian and Sal, two sharp-eyed walkers who explore the region in the present day.

…These are some maps2 (click to enlarge) of real-life Thursbitch in Cheshire. Many surrounding places named by Garner are visible too, from Pike Low to Blue Boar, Billinge and Rainow, Lamaload, Cats Tor, Shining Tor, Old Nick’s Gate, Todd’s Brook, Jenkin Chapel, Nab End and Ewrin Lane, where Martha Barber lives and Jack meets his death. Like the valley, Garner’s Jack/John Turner is based on reality; not much is known of him, though he was clearly important to the valley, lived at Saltersford Hall and died in mysterious circumstances on Ewrin Lane, where his memorial stone still stands.

Alongside Jack’s personal struggles, he and his family must wrestle against the signs of modernity that are “shouldering their way”3 into the valley in the forms of this new, brutish religion and the threat of the “land man” (108), who wants to dissect the entire, wild region with stone walls according to the new property rights of the 18th century Enclosure Acts. Ian and Sal, symbolic of both religion and science in the 21st century, have their own challenges to face, too: to define their relationship, to comprehend the ways of Thursbitch and understand its curious monoliths, and to cope with Sal’s neuro-degenerative condition that is attacking her mind and body, snatching away memories and the capacity for movement.

However, it is not the plot, original and fascinating though it is, that strikes one most when reading this novel, but Garner’s unique style, which he describes with great directness below:

“I write as few words as possible and describe the minimum of activity […] There is rarely any mention of the physical appearance of a character, nor is dialogue indicated by other than the verb ‘to say’, if at all. I do not tell the reader what the character is thinking or feeling […] [There is] sparse use of adjectives and the all but total exclusion of adverbs. The use of metaphor whenever possible, in place of a simile, also focuses the text. […] Every world has to fight to prove its need to exist.”4

It is easy, when the writer himself is brave enough to put it into such definitive terms, to nod in agreement with these observations; Garner does indeed use a minimalist style of description, sometimes only providing the bare bones of characterisation or deliberately undermining the significance of certain events so that comprehension of the plot comes in fits and starts. His use of bald dialogue – i.e. short printed lines without the interruptions of pronouns or adjectives – is also particularly distinctive.

A view from Shining Tor to Cats Tor

Of course, the instinctive reaction of many upon reading that description will be much akin to my mother’s: Oh, I can’t be bothered with all that high-art fuss. Just get on and tell the story. Indeed, Telegraph reviewer Michael Faber points out how “’Reader-un-friendly’” the book can be, with its dialectical language and “thin”5 characterisation. John Harrison of the Guardian also has a jibe at the characters, who have “none of the emotional depth” he would like, doing nothing but “bitch and moan and make aggressively metaphysical statements”6. Even the Times’ Erica Wagner, who is ultimately positive about the novel, admits to being in two minds about Garner’s complex method which “is as much archaeological as it is literary; and not just because he writes of stones”3. Garner himself admits to his novel being, like Thursbitch, “a melting pot of the mind”1, the pursuit of understanding it enough to drive one mad.

Garner’s extended description of his style is self-deprecating, suggesting his work is a technical nightmare to read, perhaps that it is impenetrable, unemotional, an academic exercise. But it’s not. His paragraphs may be short and blunt but the emotional and poetic impact of the words he uses is timeless, flowing; this is truly “an epic poem in prose”4. Garner doesn’t appear as ‘the creator’ or ‘the narrator’ in his novels – if his detail in this regard or in his characterisation is lacking then it is only “to emphasise the superiority of ancient landscape to the ant-like humans who crawl across it”5. One must only look slightly beneath the surface – embrace confusion initially to reap the reward of understanding in the end – to see how reader-friendly, how generous, the novel actually is.

The ‘Cheshire dialect’ is also something critics seem to get hung up on when reviewing this novel; for all the wrong reasons, and perhaps this is part of why Michael Faber identifies the novel as “’reader-unfriendly’”. Indeed, there are words in the text that people not from Cheshire may struggle to transliterate – “thole” (8), for example, means ‘to endure’ – for, as Garner claims, even “the modern Cheshire English is closer to ‘Gawain’”4 than it is to Standard English. Wonderful as this is to contemplate for someone with an interest in language and literature across all borders, I shy away from obsession. Garner has defined the language he uses as North-West Mercian Middle English and, in his later career, refuses to simplify it for the benefit of his readers, since it is not “’some kind of music-hall act’”5. It is a shame, then, that readers and critics still spend so much time gawping over his choice of language, as at a freak show, being either put off or, equally wrongly, overly enamoured with the “linguistic Pennine barrier”5 they see created in his fiction.

I absolutely abhor the word ‘dialect’, and refuse to use it in almost any context. ‘Dialect’ implies linguistic abnormality, a deviation from ‘proper’ English, which is insulting, patronising and incorrect. I don’t know anyone, and I would guess that nobody does, who speaks pure ‘Standard English’. I don’t even think I would particularly recognise it if I heard it. To categorise Alan Garner’s English as ‘other’ while not even fully understanding one’s own seems discriminatory and hypocritical. There are no dialects, only languages equally important, equally evolved, equally poetic when put to the right use. Therefore, when critics such as John Harrison praises Garner’s “blunt poetry of dialect”6 it literally makes me cringe. The implication is that the language is apt and beautiful simply because it’s ‘not quite normal’. It’s a kind of aw, bless critique one might apply to a child’s misnomers.

The novel is poetic, Harrison is right, but it is the whole novel, not merely in Jack’s historic chapters and not solely due to a few unfamiliar words. The pagan sections are full of song and dance and ritualistic incantation, with sentences long and winding or short and repetitive, like cycles of the seasons or gusts of swirling wind; the passages exude the rhythm of the earth, the poetry of faith and the solemnity of heavy stones. But Ian and Sal’s modern exchanges display poetry too as the debate between religion and science takes over; rocks are discussed as “Namurian. Chatworth Grit” with “recessed eroded scarp face[s] […] freeze-thaw joints” and “stress phenomena” (11) while Ian brings out his “Jesuitical pyrotechnics” (123) in a discussion of whether there exists a “sentient landscape” (87) or true “place of understanding” (152). Words swirl around each other or are fired like arrows in quick wordplay, and rhythm is traumatised further by the occasional drawn-out emotional outburst. The poetry differs, but there is poetry through it all, if one cares to look for it; the poetry of mystery and unanswered questions. 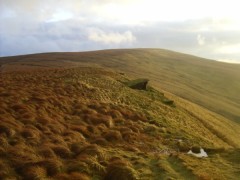 Thoon, the powerful, rocky outcrop associated in the novel with Bull and Dionysos.

While the novel is complex and merits several readings, none of the uncertainty the reader faces in its pages can sap the pleasure of reading such a carefully-crafted, moving work; in fact, the mystery only adds to the experience. The fog of the reader’s uncertainty strikes me as being like a fog that cradles shadowy Thursbitch; a fog of energy and mystery that, even without complete comprehension can, if one engages with it, bring to life the spirits of stone, of nature, of fertility, of mortality and immortality, and bathe the reader, the characters and the valley in moods of danger, love and secrecy. Myth and folklore are enlivened through the readers’ imaginations as much as Garner’s, and if one is receptive to getting a little lost in language and allusion (which seems deliberate of Garner), and to recognising the narrative as being so much more than a sum of its undescriptive, minimalist parts, and to relying on oneself, as well as the author, to find depth and meaning in the plot and characters, then the sense of fulfilment in the reading experience is truly awe-inspiring.

Well, I’ve spent so long writing about Garner’s style and haven’t got around to what I usually love to engage in, a close reading of his themes. Still, that’s enough to be getting on with. There might be another edition coming soon!

In the meantime, why not get reading my next book? It’s The Killing Jar by Nicola Monaghan. Who knows, it might be another 5 starrer!

Update: Part 2 of this review can now be found here. Enjoy!

Featured Image: The real John Turner’s Memorial Stone on Ewrin Lane, near Saltersford. The full inscription reads “Here John Turner was cast away in a storm in the night in or about the year 1755. The print of a woman’s shoe was found by his side in the snow where he lay dead.” (It is thought the date is wrong; his death was more likely in 1735.)