“In the West, in this country, I am barbarian, illiterate peasant girl, a face of third world, and irresponsible foreigner. An alien from another planet” (154)

Prejudice enrages me. Freedom of movement fills me with hope.

I love the feeling when you read a book and think, however delusionally, ‘Wow, this was written just for me’. That is how I felt when I turned the last page of Xiaolu Guo’s novel, A Concise Chinese-English Dictionary for Lovers, set in Hackney, in the City of London. 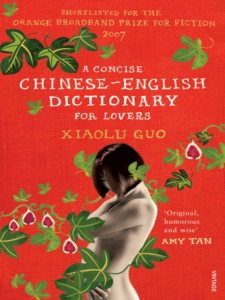 Zhuang Xiao Qiao – or ‘Z’, as the English are encouraged to call her since “my name too long to pronounce” (48) for them – is a twenty-three year old Chinese woman who travels to London for one year from her simple, rural home in China, in order to learn English. She struggles. England is “cold”, the people unfriendly (“nobody smile to me” (43)) and their system of etiquette in social situations a complete minefield. Trudging between her befuddling English classes, her bleak hostel and the late-night cinema showings (just to have something to do) Z is lonely and racked with confusion. It seems as though the Chinese and English cultures are just too different – seemingly incompatible. Even her beloved Chinese-English dictionary has difficulty defining the meaning she desperately needs; among other words, “romance not to be found in my Concise Chinese-English Dictionary” (91).

Guo makes this incompatibility between cultures all the more obvious and effective by setting out the novel in the style of the protagonist’s notebooks, in which she records new vocabulary and pens her diary entries, side by side. Through this original and compelling format, the reader is exposed to Z’s innermost thoughts and frustrations as well as her battle with the English language and with finding a place for herself in her new environment: initially, she feels like “a little alone teacup” or “like cat without master” (90). 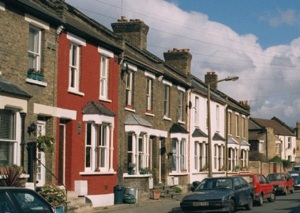 On her journey, Z meets and starts living with an older Englishman and soon realises that the fight for understanding is not limited to nations, but occurs between individuals too. “You a free man of free world. I am not free, like you” (113); “You possess my whole body. […] My whole body is your colony” (132). What is more, the waters of love – or dependency – are treacherous: there is so much Z does not understand above love, sexuality, men and women; there is so much she is ready to give if she can…but when language between individuals fails, is physical proximity enough?

“After all these fightings, all these miseries, you don’t talk as the way you did before. You just listen; listen to my words; then stop listening and think of your own world. But I can’t stop talking. I talk and talk, more and more. I steal your words. I steal all your beautiful words. I speak your language. You have given up your words, just like you gave up listening.” (293)

The language Guo uses is simple (both because Z doesn’t know much of it and, later, because Z’s style is always innocently direct) but the emotions are complex – and, for me, painful. It is not so much the plot that makes me feel that this book is so personally relatable (although in many ways it is), but rather the fear of loneliness contained within every page and every exchange between characters. A person’s loneliness is something to which my heart almost always responds, wrenchingly.

Xiaolu Guo. In 2013 she was named one of Granta’s Best Young British Novelists of this decade.

At the end of the novel, Z sums up England as “the country where I became an adult, where I grew into a woman, the country where I also got injured, the country where I had my most confused days and my greatest passion and my brief happiness and my quiet sadness” (353). It is not only London that Z gets to know, but it is to London that she responds. Unlike the novel’s representations of the English themselves, who see “London is a place sucks”, “the place making everybody aggressive” (167), where “you can’t find love and keep it” (168), Z “loves these old oily cafes around Hackney. Because you can see the smokes and steams coming out from the coffee machine or kitchen all day long. That means life is being blessed” (118).

This is not a happy novel, but it is a phenomenally beautiful one. I love it. 4/5 stars.

Next week I’ll be reading East of Acre Lane by Alex Wheatle, set in Greater London. Come and have a look-see then.

Phil Rickman’s “The Fabric of Sin”

The premise of the Merrily Watkins series by Phil Rickman certainly sounds original:

The confident single-mum to strong-minded teenager Jane leads a religious life (in contrast to her daughter’s determinedly pagan beliefs) as a vicar of her own parish in Herefordshire, and is also the country’s first female appointed Deliverance Minister (a sort of church-condoned exorcist of bad spirits, if you can believe it). Alongside this spiritualism she takes to amateur sleuthing (why not?), investigating in The Fabric of Sin, the ninth novel in the series, the ancient Master House in Garway, on the England-Wales border, which is thought to have Templar connections and an evil energy living within its walls. As violence, mysterious events and the uncovering of scandalous historic records ensue, the Church – nay, the Archbishop of Canterbury himself – becomes involved in the case, as does Prince Charles and the rest of the Royal Family. After all, “you must never trust the buggers. Never. Any of them. Not at this level” (57). (Honestly, the plot does get that wild.)

As you might guess, I spent most of the time I was reading this novel completely taken aback by its scale of bizarreness. Don’t get me wrong, I don’t think there’s anything at all the matter with plotlines that are weird or ambitious…but the complete absence of conventionality in this novel’s characters, plot and structure was utterly throwing. In fact, I’m still reeling from the oddity: the bombardment of real religious imagery versus the tale of murderous cover-ups; the good-guy-bad-guy ambivalence towards the Church and the Royals; the sheer number of people across the country who seemed to have a stake and make an appearance in the melee; the tension and confusion between English and Welsh identities in their past and present manifestations…There’s so much going on in this novel politically, and so many characters who appear and disappear within a single page, and so many unfinished sentences and unanswered questions that, despite this novel being 539 pages long, blink and you’ll miss the point of it. The word that comes to mind to describe the reading experience of this novel is ‘WHAM!’ 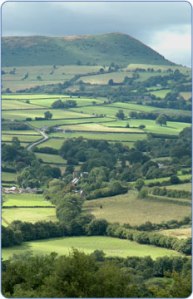 As a result, Rickman’s novel is certainly impressive and unpredictable, but also fairly stressful to read. It was more about politics than mystery-solving, so didn’t really turn out to be all that gripping. Oftentimes I was at a loss as to what was actually going on or who was involved. I don’t have much knowledge or interest in Church/Monarchy politics and that’s one the reasons I usually steer clear of Templar-centric novels: the legends behind them are so far-fetched to my simple mind that they irritate me. I didn’t really take to Rickman’s characters either – designed to be unconventional, their novelty soon wore off leaving an empty space – and so don’t feel the need to read any other novels in the series. This novel was also written in what I recognise as being a sort of lazy, careless style: non-dialogue sentences starting with “Like, when did that happen?” and non-dialogue explanations leading with the phrase, “Couple of years ago” (17), missing the indefinite article ‘a’ from the beginning. I know some people will think that’s incredibly pedantic, and point out the style is probably not lazy at all, but carefully crafted. Nevertheless, it’s a style that I personally don’t take to when there’s no obvious literary purpose.

On the other hand, I liked the powerful descriptions of the sentient landscape along the England-Wales border, and I think the novel offered significant observations on the formation of identity in England, Wales, Herefordshire and, quite separately, Garway.

“Three landmark hills were laid out along the horizon. Like ancient and venerated body parts, Merrily thought, the bones of the border. Holy relics on display in the sunset glow […] The volcanic-looking Sugar Loaf and the ruined profile of the Skirrid which legend said had cracked open when Jesus Christ died on the cross. Still somehow sacred, these hills. No towns crowded them, nobody messed with them […] The third hill had been stabbed under its summit, some kind of radio mast sticking out like a spear from the spine of a fallen warrior, a torn and bloody pennant of cloud flurrying horizontally from its shaft.” (9)

This, the England-Wales border, is the “forgotten bit of old England” (13), a landscape that “has two personalities […] Long, light views on the English side, and then deep green and full of drama as it swoops down to the Monnow Valley and Wales” (33). In this part of the country, (unlike the sometimes over-politicised Scottish-English border), lines get lost. Blurred. Is this Wales? Is this England? Who belongs where?

“Still England. It had to be; there, below the road, was the River Monnow, which was the border, failing to be crossed by a smashed and collapsing footbridge, fenced off, with a sign that said: Danger. But if this wasn’t Wales, neither was it truly Herefordshire, not with names like Bagwllydiart on the signposts.” (63-4)

The border seems harder to mark the closer you get; people struggle to cope with being “neither one place nor the other” (42); and “if someone lives just a few yards over the border in what might seem to be a very English part of Wales they become determinedly Welsh Welsh” (271) to compensate for their uncertainty of identity. This uncertainty has brought on, throughout history, a strange feeling of instability and violence which plagues the landscape, its villages and its inhabitants. 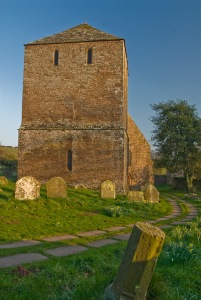 Garway is the main site of strangeness and disturbance. The village has become “like another country” (9), Merrily feels, “a remote and separate realm” (113). Even uneducated Gomer can identify that “Garway is its own contex. There’s Hereford and there’s Wales…and there’s Garway. And Garway’s its own contex” (362). Judging by this novel, the convergence of England and Wales, and the subsequent emotional and political significance, seems to be a key characteristic of Herefordshire identity, much as the northern English counties obsess about the proximity of Scotland.

Rickman also offers a criticism of modern English identity as a whole, focussing, as many other modern English writers seem to have done on this journey of discovery, on “rural warming” (18) (think ‘global warming’) – the rapid intrusion of city on countryside; on landmark events such as “Foot and Mouth in 2001” (53) or “nine-eleven and seven-seven” (199); on the level of “self-indulgent second-bloody-homers” (264) that are increasing the demand for rural property development; on “the [terrifying] amount of surveillance in this country” (82); on the “rampant overpopulation” (88) and on “shining-arsed buggers with clipboards” (186) who roam the country as troublesome representatives of bureaucracy, red-tape, and officialdom. These themes are becoming increasingly familiar as we progress through this challenge: is this all modern Englishness amounts to?

So overall, an interesting read; I was intrigued by the setting if not by the politics and, for that reason, will award the novel 3/5 stars.

Next week I’ll be reading Colin Grant’s Bageye At The Wheel for Bedfordshire. Until then!