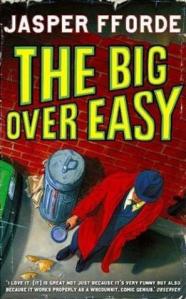 Jasper Fforde’s “The Big Over Easy”

The subject of this, my book review for Berkshire, is Jasper Fforde‘s bizarre novel The Big Over Easy, set in Reading. It is the first in Fforde’s series of ‘Nursery Crime’ novels, featuring Reading Constabulary’s NCD (Nursery Crime Division), headed by DI Jack Spratt. Jack is responsible for solving all crimes relating to nursery rhyme characters: he was the arresting officer for “the violently dangerous psychopath, the Gingerbreadman” (12); he took the three little pigs to court over the messy murder of Mr Wolf and, now he investigates the mysterious death of Humpty Dumpty, who seems to have had a great fall from off his favourite wall…or was he pushed?

Like I said, bizarre. It is both straight-faced detective fiction, filled with all the expected twists, turns and rivalries, and comedic romp down “Grimm’s Road” (59), meeting a whole host of well-known childhood characters. You could read and re-read this novel countless times and continue to find more nursery rhyme references, some blatant and some brilliantly subtle.

Fforde’s novel is a marvellous work of imagination and extremely original but, it seems to me, a bit of a gimmick. I definitely developed allusion-fatigue by the time I was 25% of the way through, and the plot was unfortunately not strong enough to resurrect my interest at the end. I am not inspired to read the rest in the series: aren’t they all the same?! It’s another 2/5 starrer, I’m afraid. 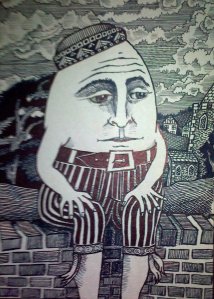 Sadly (in respect of this challenge I mean) there is not much of a portrait of Berkshire in the novel either, aside from the fact that the indistinct city of Reading becomes the centre of this strange nursery rhyme world and of modern policing, which is more interested in making headlines and generating positive public opinion than the search for truth and justice.

It is interesting to think, however, that this could be considered a particularly British novel. Or, at least, an English-speaking-world novel. After all, there can’t be many other places that understand the references to Jack the giant-killer / magic-bean finder / beanstalk-climber, can there?

Next week I’ll be reading the slightly more mainstream (in a good way I hope) The Legacy, by Katherine Webb. It’s for Wiltshire, so join me then!

Pressing the play button above will unleash the flowing soprano of Madeleine Grey, singing “Bailero” from Canteloube: Songs of the Auvergne.

Jonathan Coe’s “The Rain Before It Falls”

This is the theme tune to this novel. The music weaves in and out of characters’ lives, sweeping, eerily and yet dream-like, over the Shropshire landscape, tying together past and present, the real and the imagined. It seems to echo through the hills in the same way as the story does. The Rain Before It Falls, by Jonathan Coe, is a novel that delves under the convenient façade of comfortable homes and happy families, to force its characters – particularly its women – to question who they are and how they have come to be.

Gill and her two grown-up daughters, Catharine and Elizabeth, are active, intelligent and accomplished; they live busy lives spread across the south of England, and their family seems a close and contented one. So absorbed are they in their day-to-day affairs that they barely register the world around them; “the warmth of inside” has, for years, distracted them from how “chilly” (1) the air has become. It is only when elderly Aunt Rosamund dies, leaving behind audio tapes narrating the whole family’s history – spilling secrets, reopening old wounds and exposing rumours and truths – that their eyes are opened to the lack of connection and meaning in the modern world; a modern world that is slowly turning the past into half-forgotten memory, imagination, myth. Suddenly, a search for understanding begins; can they reach enlightenment before it is too late, before the tapes finish, the photographs are put away and the present day swallows them once more? Can they find the rain before it falls?

The majority of this novel is narrated by Rosamund as she describes, in detail, twenty family photographs and the generations of stories behind them. We ‘listen’ as Gill and her daughters listen – without knowing what the final result will be and blind to the images in Rosamund’s lap. But, my goodness, the description Coe uses didn’t leave me blind for long – each photo seemed to come alive in its minutest detail, becoming as familiar and recognisable to me as if it were pinned in one of my own albums. The intuition develops in fluid layers: we see where individuals are positioned in the image and what the occasion shows; we glimpse what lurks at the edges of the frame or behind the forced smiles; we realise what the photograph summarily fails to capture. In fact, reading these passages isn’t like reading at all: the writing transcends the pages to become an audible and – in terms of the photos – tangible story. 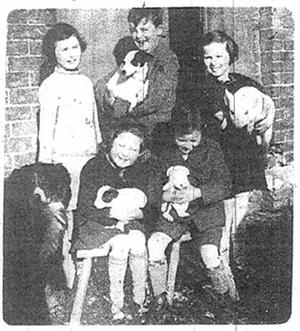 Evacuees in Shropshire, where Rosamund was sent during WW2.

There is a tense triadic relationship in the novel between photography, memory and imagination. To begin with, the photographs seem to provide the unshakeable historic “facts” (113), reliable in their frozen, unchanging existence in a way that Rosamund’s “phantom memories” (39) can never be. Memories are, after all, one step from “fantasies, imaginings” (39), and Rosamund frequently admits, “I think this is something I am now imagining, not a memory at all” (45-6).

And yet, Rosamund also despairs at “what a deceitful thing a photograph is” (193), for “although it seems to record an occasion with perfect fidelity, it actually gives no indication of what was going through the minds of the people who were there” (130). Even as she relies on the photos to structure her story, she seems to loathe them for their trickery: “everybody smiles for photographs – that’s one of the reasons you should never trust them” (214). The photos cannot live up to her often rich memories, as “there are no colours […]; it is a black-and-white photograph”, failing to capture even the simplest details, like “the letterbox in the front door, which my father painted yellow, I remember” (36).

Ultimately, Coe presents Rosamund’s fight with the realisation that, without photographs, her memories fail; without memories, photographs mean nothing. And when Rosamund is gone, taking her memories with her, there can be “no pictures, no corroboration, no proof” (39) of all the years of love, hate, joy, grief, dreams and struggles expended to give Catherine and Elizabeth the lives they have now. This mesmerising novel is clouded with a sense of Rosamund’s conflicting desperation and exhaustion, a heartrending combination – there is so much going on in this short novel, and Coe’s writing…well, I could want nothing more.

Coe builds dark voids between each of his characters, and Rosamund’s deathbed endeavour to link past with present and reunite distant family members is made all the more tragic and hopeless by the sense that, in death, she is the most disconnected character of all. What is more,  Rosamund’s funeral is “curiously unsocial” (4); Gill’s husband is plagued constantly “with a sense of having obscurely failed her” (2); Gill’s children, despite their apparent closeness, sometimes seem to her like “alien beings” (4)…Even the members of this nuclear unit seems “so distant” and “ill at ease” (9) at times, as though “a sort of wordless distance [had] open[ed] up between them, a sudden bewildered awareness that somehow, without anybody noticing, they had become strangers to one another” (21).

Long Mynd in the Shropshire Hills

This lack of connection seems to have a lot to do with – and even be a symptom of – the modern world that Coe describes as infiltrating the “beloved county of [Rosamund’s] wartime childhood” (9). In her memory, Gill sees Shropshire “in vivid primary colours” but it now seems “washed grey […] a sheet of perfect white, signifying nothing” with the “imperishable noise of far-off traffic” (2) crowding in on its once secluded boundaries. Dank and dirty London is creeping ever-closer, with its “imagined dangers of […] bombs [and] once-routine tube and bus journeys suddenly turned into wagers with life and death” (1). Gill does not consider herself part of provincial Shropshire nor attune to London life.

Rosamund, in contrast, is “rooted in the Shropshire landscape, saturated with the colours and contours of its hills” (102) which “are part of your story” (94), she tells her descendants. She takes comfort in the landscape, for it soothes all ills:

“Places like this are important to me – to all of us – because they exist outside the normal timespan. You can stand on the backbone of the Long Mynd and not know if you are in the 1940s, the 2000s, the tenth or eleventh century…It is all immaterial, all irrelevant. […] You cannot put a price on the sense of freedom and timelessness that is granted to you there, as you stand on the high ridge beneath a flawless sky of April blue and look across at the tame beauties of the English countryside, to the east, and to the west a hint of something stranger – the beginnings of the Welsh mountains” (94-5).

As Gill hears these words and travels, literally and figuratively, back to her roots, she realises how deeply “these fields, these villages, these hedgerows, were still inscribed upon her memory; they were the very bedrock of her consciousness”, and she begins to understand the “precious” importance Rosamund places on finding “a sense of your own history; a sense of where you come from, and of the forces that made you” (32). I will not reveal the extent to which Rosamund and Gill are successful in their quest to join hands through time, but as the past comes alive to the three modern women, they become “half-removed from [their] surroundings”; the present seems “ghostly, unfamiliar” (148) as more important matters than trivial domestics emerge. They realise the urgent need to trace these “shadows of the past” (148) and to try to define these “unexpected patterns” (205) in order to be reconnected to each other, to the world, to their home, to the meaning of life. Listening to Rosamund’s healing words gives Gill the hope, at least, that things might come together, and that the “formlessness of jumbled buildings, trees, skyline” might develop into “gradations of colour”, with once defined, rigid outlines “blurred” (12) peacefully into one.

The London skyline – an example of the jumbled buildings Gill finds it hard to accept.

Reading this novel was a truly cathartic experience. Coe seems to involve his readers in the narrative as though they are characters themselves. I found the relationship between photography and memory fascinating and moving and I loved the rendering of audiotape onto page – both original and believable. I was blown away by Coe’s style and simple, yet intense, descriptive technique. I can’t wait to read another of his; I’ve certainly got plenty on my wish list now that this one has earned 5/5 stars.

Next week I’ll be reading The Woman Who Went to Bed For A Year. No, it’s not about me; it’s by Sue Townsend. Stay tuned!